Beluga caviar is roe from the Beluga sturgeon (Huso huso), a fish found primarily in the Caspian and the Black Sea basins, and occasionally also in the Adriatic Sea.

Beluga caviar eggs are the largest ones among the commonly used roes. They normally range in color from light gray to a gray that is so dark that it can appear black. The lighter the gray, the older the fish and eggs from older fish tend to be more pricey. Very old females (100+ years) can produce pearly white eggs. These are called almas, which is the Persian word for diamond. This is the rarest, type of Beluga caviar.

The caviar type listed as the most expensive one in the Guinness Book of World Records 2017 is the Iranian beluga caviar of the type almas. According to this record entry, you can expect to pay at least £20,000 for one kilogram almas. This caviar is served at some of the most exclusive restaurants in the world.  One such restaurant is supposed to be the restaurant in the casino in Monte Carlo.  A high roller casino that is known for elegance, high stakes gambling, exquisite food and a world-class wine cellar.

The Beluga sturgeon is listed as Critically Endangered by IUCN 3.1.

In 2005, United States authorities banned the importation of Beluga caviar originating from the Caspian and the Black Sea basins. In 2006, the Convention on International Trade in Endangered Species (CITES) suspended the caviar trade with Azerbaijan, Bulgaria, China, Iran, Kazakhstan, Romania, Russia, Serbia and Montenegro, Turkmenistan, and Ukraine. Iran was not included in the ban since they were deemed to be practicing effective conservation and policing of fisheries. Since 2007, CITES has published yearly quotas for the trade in wild caviar from the Caspian Sea basin.

There are now breeding facilities that breed beluga sturgeon from captive spawned fry.  They raise the fish until adulthood and produce high-quality beluga caviar.  This is an expensive process but the high price of Beluga makes it profitable and the process will hopefully reduce the pressure on wild Beluga sturgeon in the future.  Farming the caviar is easier than fishing for the species. 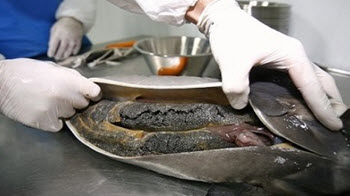 The traditional way of eating beluga caviar is to place the eggs on the skin between your index finger and your thumb. After taking eggs into your mouth, roll them around slowly to pop them and release the exquisite flavor.

Beluga caviar is typically served in a caviar spoon made from a non-metallic material since metal can make the caviar taste metallic. Bone and mother of pearl are two examples of popular materials for the part of the spoon that will be in contact with the caviar.

Beluga caviar is often served by itself or with toast only.