Sevruga is one of the more expensive caviar types, but usually fetch a lower price than beluga caviar and ossetra caviar. Sevruga caviar is roe from the Sevruga sturgeon (Acipenser stellatus), also known as the Stellate sturgeon or Starry sturgeon. This is one of the smallest sturgeons commonly farmed for its roe. The eggs sport a pearlescent gray color and are small compared to beluga and ossetra caviar eggs. 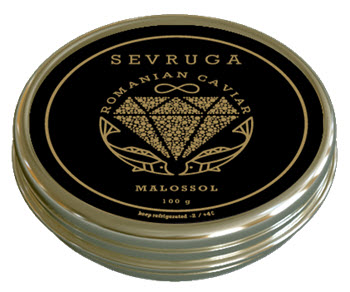 The taste of Sevruga caviar varies depending on the origin of the fish. In many cases, it will be stronger and saltier than beluga and ossetra caviar. As mentioned above, the eggs are quite small compared to those of Beluga and Ossetra caviar.

Traditionally, sevruga caviar has been sold in red tins.

A. stellatus is listed as Critically Endangered on the IUCN Red List 3.1. This is the highest level of endangerment; the next level would be Extinct in the Wild (EW).

One of the main reasons for its decline is overfishing. Within its native range, the Sevruga sturgeon isn’t just priced for it caviar; it is eaten as a food fish too. It is prepared in various ways, including broiling, smoking, frying and as ingredient for kebab.

International trade in A. stellatus and products derived from this fish, including sevruga caviar, is restricted by CITES.

Several attempts have been made to farm the Sevruga sturgeon and varying degrees of success has been achieved. Experiments have for instance taken place in Iran, Russia, Italy and the USA.

The oldest known Sevruga sturgeon was 27 years of age.

As mentioned above, the Sevruga sturgeon is a comparatively small species of sturgeon. It is slim-bodied; with the longest specimens being about 220 cm in length and weighing around 80 kg.

The Sevruga sturgeon can be easily recognized on its long, thing and straight snout, which is adorned with a row of five small barbels near the mouth.

The body is of a dark grayish-green or brown color, with a pale underside and pale scales on the lateral line.