Caviar from the Siberian sturgeon (Acipenser baerii) is strongly associated with Russia, but is today produced in China and the USA as well. Generally speaking, it is less pricey than Beluga and Ossetra caviar.

Siberian sturgeons produce firm and medium-sized eggs that range in color from dark gray to brown. They have a delicate pop and the texture is rich and creamy. When it comes to flavor, Siberian sturgeon caviar is typically described as being sweet and nutty. Generally speaking, this caviar tend to be a tad more briny than Beluga, Sterlet and Sevruga caviar. 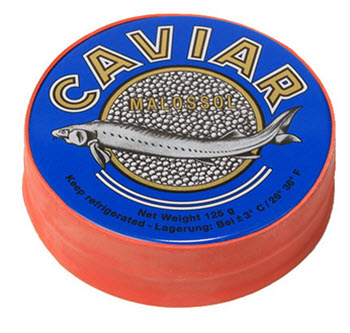 The Siberian sturgeon is listed as Endangered on the IUCN Red List 3.1. The stock decline started as early as the 1930s. The three generation period of this species is within the 75-90 year range, which means that it needs plenty of time to recover and replenish even if conditions are altered to the better.

Overfishing and dam hydropower dam constructions are two main problems for the survival of this species. Also, water pollution from mining has led to reproductive abnormalities in the rivers Ob and Kolyma, where many females are sterile or reproductively challenged.

Today, it is possible to purchase Siberian sturgeon caviar that comes from captive-raised fish, including caviar from fish farms located in China and the United States.

About the Siberian sturgeon

Male Siberian sturgeons reach sexual maturity at 11 – 24 years of age, while females tend to be in the 20-28 year span when they reproduce for the first time.

The subspecies A. b. baerii migrates to the mouth of Ob during the winter and then swim thousands of kilometers upstream to spawn in springtime.

A. b. baicalensis is a lake-dwelling subspecies found chiefly in the northern end of the Lake Baikal. It migrates up the Selenga River to spawn.

A. b. stenorrhynchus lives in eastern Siberian rivers. Most individuals migrate to spawn, but some don’t.

The maximum recorded weight for a Siberian sturgeon was 210 kg.

The oldest known specimens were around 60 years of age.