Sterlet caviar is harvested from the Sterlet sturgeon (Acipenser ruthenus), which is one of the smaller sturgeons. Once upon a time, the intensely flavorful Sterlet caviar was strongly associated with the royal families of Russia, Austria and Iran.

The Sterlet sturgeon is one of the smallest species of sturgeon, and this translates into small eggs as well. The eggs are small and golden, with an earthy flavor combined with hints of rich nuttiness. The texture is both juicy and creamy.

The eggs have a pearlescent shimmer to them and vary in color from pale gray to a dark gray that can look nearly black. Some eggs display beautiful deep-blue hues.

The Sterlet sturgeon is listed as Vulnerable on the IUCN Red List 3.1. Several factors have contributed to its decline, including overfishing (for flesh and caviar), pollution and dam buildings.

Today, a majority of the Sterlet caviar in the international trade comes from aquacultured Sterlet surgeons. Sterlets can be grown in cages or in ponds. Ponds need to be fairly large with good water quality. Standard pond fish food can cause problems for sterlets, since they aren’t good at digesting plant proteins.

Restocking projects where sterlets are re-introduced into the wild are ongoing, with varying results. Due to the demand forsterletcaviar, sterlets have also been introduced in waters outside their native range. So far, none of these non-native projects have lead to long-term self-sustaining populations of sterlets. 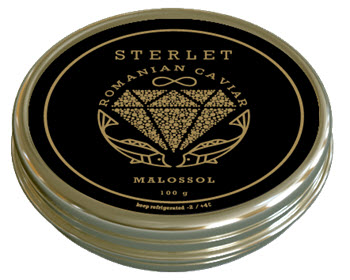 The Sterlet sturgeon (Acipenser ruthenus) is one of the smaller sturgeons and the eggs are also quite small. The largest Sterlets tend to be 100-125 cm long and weigh slightly above 15 kg.

Where does the Sterlet sturgeon live?

The Sterlet sturgeons live in large rivers that flow into the Caspian Sea, Black Sea or Azov Sea, and it is also found in rivers in Siberia as far east as Yenisei.

There used to be populations that migrated between fresh water and salt water, but they have gone extinct.