Here are a few examples of caviar produced within the United States. 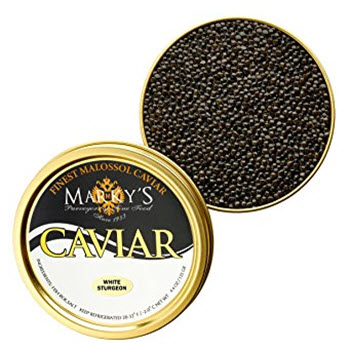 This caviar comes from the White sturgeon (Acipenser transmontanus), which is native to the Pacific side of North America. This species, also known as the Pacific sturgeon, is found from the Gulf of Alaska in the north to Monterrey, California in the south. In addition to this, landlocked populations have been reported from the Columbia River Drainage in Montana and Lake Shasta in California.

In the United States, White sturgeon for caviar production is chiefly raised by fish farms in California. Catching wild White sturgeon in the U.S. has been banned by the authorities to preserve the fish from extinction.

The eggs are big and vary in color from light to dark brown. This is one of the largest sturgeons in North America, and it produces large eggs (but not as large as those of the Beluga sturgeon). White sturgeon caviar can be served directly on a spoon as it is, but is also a popular compliment to foie gras.

American Hackleback caviar comes from the Shovelnose sturgeon (Scaphirhynchus platorynchus), a freshwater sturgeon also known as Switchtail, Sand sturgeon and Hackleback. This species, which lives in the Missouri and Mississippi river systems, is the smallest species of freshwater sturgeon in the United States, and the caviar consists of small eggs. If you love big Beluga-sized eggs, this is not the caviar for you. If you, on the other hand, is interested in experiencing assertive flavors in small packages, you should definitely give the American Hackleback caviar a try.

This means that roe from paddlefish species is caviar too. If you want to be adventurous and try something else than sturgeon caviar, one excellent option is caviar from the paddlefish Polydon spathula, which is farmed commercially in the United States and not overly difficult to obtain.

The caviar from Polydon spathula American paddlefish (P. spathula) consists of medium-sized eggs which vary in color from dark to light gray. If you want to go the classic route, serve up your American paddlefish caviar with blini and smetana (or crème fraîche if you can’t get smetana).

American paddlefish caviar is often compared to Sevruga caviar when it come to look and taste. The flavor is quite bold while the texture is silky and smooth, and the earthiness and the buttery tones complement each other very well. A notable difference between Sevruga caviar and American paddlefish caviar is that the latter wont give you that special crisp “pop” as the eggs are crushed in your mouth.

With American paddlefish caviar being both less expensive and much easier to source from legal and sustainable producers, it’s no wonder that so many connoisseurs – especially in North America – have developed a soft spot for this non-sturgeon caviar. 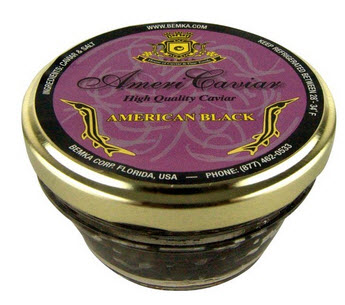 Bowfin roe is not caviar, since it doesn’t come from a member of the order Acipenseriformes. Instead, it is harvested from the Bowfin fish (Amia calva) which belongs to the order Amiiformes. Despite this, Bowfin roe is sometimes colloquially referred to as “American black caviar” since it looks similar to black caviar. The eggs are small, dark and firm, and the flavor is fresh.

Bowfin fish spawn between April and June. Generally speaking, the number of eggs produced by the female will depend on her size, with large specimens often containing over 55,000 eggs. Bowfins reach sexual maturity at 2-3 years of age.

Bowfin roe is produced throughout the Southern United States. One of the states where bowfin is still caught in the wild for its roe is Louisiana, but bowfins are cultivated there as well. Bowfin roe processed in Louisiana is sometimes marketed as “Cajun caviar” despite not being a true caviar. One of the most well-known trade names is Choupiquet Royal.